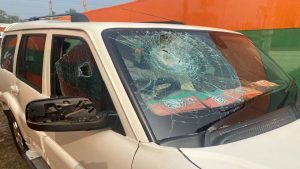 While addressing the party workers at South 24 Paraganas, Nadda said, “There isn’t a car in our convoy which was not attacked. I am safe because I was travelling in a bulletproof car. This state of lawlessness and intolerance in West Bengal has to end,” said the BJP chief.

His remarks came shortly after vehicles of BJP leaders were stoned when they were going to attend an organisational meeting at Diamond Harbour in South 24 Parganas district.

The assault was telecast live by several Bengali news channels. Vehicles of some media houses were also damaged.

West Bengal BJP chief, Dilip Ghosh, mentioned,  “On our way to Diamond Harbour, TMC supporters blocked the road and pelted Naddaji’s vehicle and other cars in the convoy with stones. This only shows the true colour of the TMC.”

He had urged Shah to issue directives to the state home secretary to provide adequate security cover during Nadda’s visit to Diamond Harbour.