SunstarTVBureau: Odisha, Chief Minister Naveen Patnaik, announced, the much-awaited Inter-State Bus Terminal (ISBT) at Baramunda in the Capital city will be operational by mid-2022, on Thursday. 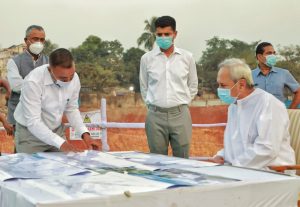 On a visit to Barmunda bus terminal to review the progress of the ISBT and bus depot project, the CM stated, the state government will invest a whopping Rs 180 core for contraction of the state-of-the-art bus terminal.

CM mentioned that the State government has plans to construct the ISBT as one of the major bus terminals of eastern India as it has been planning for the makeover of the Baramunda terminal since 2010.

The new terminal will have passenger amenities and can accommodate over 200 buses and nearly 550 buses can be accommodated at the parking lot.

The makeover plan of the bus terminal was approved by the State cabinet with an investment of Rs 160 core, on September 26, 2019.

The government had assigned to the Bhubaneswar Development Corporation (BDA) for development of the project and the Bridge and Roof Company of India Limited and a Central PSU is implementing the work.