SunstarTV Bureau: Madhya Pradesh government urged Odisha government to take care of the wild cat ‘Sundari’ till the arrangements for its relocation are made. 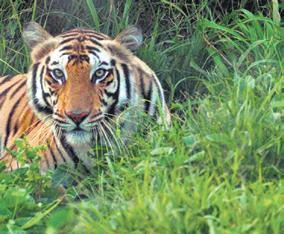 MP, Chief Minister Shivraj Singh Chouhan mentioned in his letter to strengthen tiger population in the country. MP had spared a pair of Tiger Reserve as per advice of the National Tiger Conservation Authority (NTCA).

Mahavir and Sundari was the first pair of tiger and tigress sent to Satkosia from MP’s Panna Tiger Reserve and Bandhavghar respectively as part the translocation project. Mahavir died a few months later allegedly due to poaching, while Sundari left out in the open attacked villagers. She was immediately put into an enclosure and, following strong opposition from the local community, Odisha asked Madhya Pradesh to take her back.

Both states then wrote to the National Tiger Conservation Authority (NTCA), with Odisha urging that Sundari be sent back while Madhya Pradesh remaining reluctant.

In 2019, Madhya Pradesh finally agreed to take back Sundari following an NTCA order.

Chouhan wrote that Madhya Pradesh recently received technical approval for construction of tiger sanctuaries in Bandhavgarh, Kanha and Pench where Sundari will be finally kept. However, as the process of construction of the sanctuary would take time, she would temporarily be kept at the Ghorela centre, which is currently occupied by the cub and the government will have to wait for the relocation until the cub is ready to be sent out in the open.