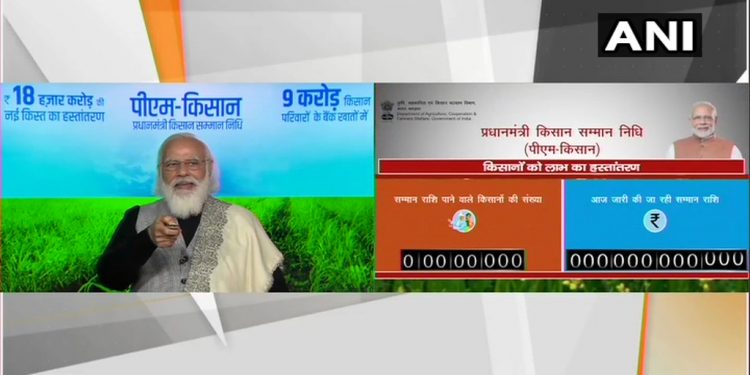 In this conference, PM releases Rs 18,000 core as the next instalment under the Pradhan Mantri Kisan Samman Nidhi scheme to over 9 core farmers. Where today, more than Rs 18,000 cores have been directly deposited in the accounts of farmers with no middlemen, and no commissions. At the starting of the session, Ministry of Agriculture, Narendra Singh Tomar, said, “I appeal to the protesting farmers to end their protest and hold talks with the government. I hope they will understand the importance of the new farm laws, and the issue will be resolved soon.”

After the release of Rs 18,000 cores as part of PM Kisan Samman Nidhi scheme, PM started interacting with farmers, where farmers from different state shared their experience on Kisan Credit Card in 2019.

Naveen, a farmer from Odisha, stated, “I had received my Kisan Credit Card in 2019 and took an amount of Rs 27,000 on loan from the bank on a mere 4 per cent interest as compared to 20 per cent from intermediaries”.

Replying to the farmer from Odisha, PM said, “I urge you to tell farmers about the Kisan Credit Card and its various benefits which include the availability of loans at low-interest rates”.

Even the Defence Minister, Rajnath Sing shared his point of view on new farm law, he mentioned, “There has been misconception that Minimum Support Price will end. Prime Minister has said and I’ll also give my word that MSP won’t end. It is farmers who’ve supported the country whenever it underwent economic recession and we’ve seen this many times”.

Manoj Patidar, farmer from Dhar, Madhya Pradesh during interaction with the PM, said, “So far, I’ve received Rs 10,000 under PM Kisan Samman Nidhi. Under the new farm laws, we can now sell the farm produce to any private business or organisation. This year, I sold 85 quintal soybean to ITC”.

At the end, Rajnath Singh asked farmers to accept the implementation of farm laws for a trial period. I hope you won’t regret the decision.