The South Star was shooting for a movie in Hyderabad since the last 10 days. A couple of people on the sets tested positive for Covid-19. But Raji was tested negative while being tested for covid-19, the Apollo hospital released a press note stating about the health condition of the hero. 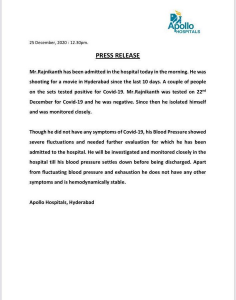