SunstarTVBureau: The National Congress, boycotted the bhoomi pujan ceremony of the new parliament building, on Thursday. 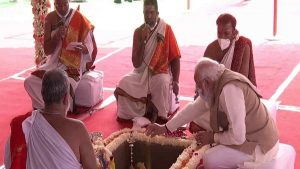 Prime Minister Narendra Modi performed the bhoomi pujan ceremony for the new building, which is expected to be completed by the 75th anniversary of India’s independence and its estimated to cost Rs 971 core.

No one from the Congress attended the bhoomi pujan ceremony, performed by Prime Minister Narendra Modi in the presence of top politicians, industrialists and foreign envoys.

Congress’s chief spokesperson Randeep Singh Surjewala, criticized by tweeting, “Dear PM, Parliament is not mortar and stones. It envisions democracy. It imbibes Constitution. It is economic-political-social equality. It is compassion and camaraderie. It is the aspirations of 130 crore Indians. What would a building built upon trampling of these values represent?”

Surjewala said in a democracy, power did not mean fulfilling one’s whims and fancies, but serving the people and public interest. “Mr Modi, history will also record that when the ‘Annadata’ (food grower) was fighting for his rights for 16 days on the streets, you were building a palace for yourself in the name of Central Vista. In democracy, power is not a means to fulfil your whims, but is a medium for public service and public welfare,” he said in another tweet in Hindi.

Senior Congress leader Jairam Ramesh said the existing Parliament building “bears a remarkable similarity to the Chausath Yogini Temple in Morena in Madhya Pradesh, while the new Parliament bears a likeness to Pentagon in US”.

Former finance minister P Chidambaram said, “The foundation for a new Parliament building was laid on the ruins of a liberal democracy.”