SunstarTV Bureau: Indian Army has released a soldier of China’s People’s Liberation Army (PLA), three days after apprehending him at the southern bank of Pangong Tso in eastern Ladakh, on Monday.

The soldier was returned to China at the Chushul-Moldo border point in eastern Ladakh at 10.10 am. 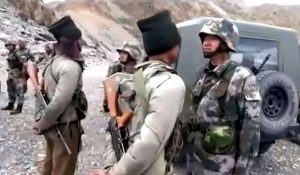 The Chinese soldier was captured at the southern bank of Pangong Lake in the early hours of Friday after he transgressed across the Indian side of the Line of Actual Control (LAC).

“The PLA soldier had transgressed across the LAC and was taken into custody by Indian troops deployed in this area. Troops from either side are deployed along the LAC since friction erupted last year due to unprecedented mobilisation and forward concentration by Chinese troops,” the Army said in a statement on Saturday.

It was the second such incident of India capturing and subsequently returning a Chinese soldier in the last three months.

SC to pass order on farm laws by today or tomorrow