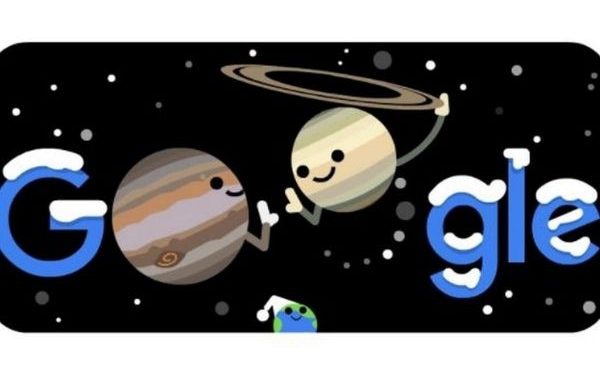 SunstarTV Bureau: After 400 year, geo-lovers will have this rare opportunity to watch the conjunction of Jupiter and Saturn, on Monday night sky between 6.30-7.30 PM.

Asserting this unique occasion, Google also changed its doodle to animated assimilation of Jupiter and Saturn.

This celestial event takes place when Jupiter and Saturn get so close to each other in the sky that they appear as a single star to the unaided eye.

This event was last observed nearly 400 hundred years ago in 1623 and the next one is likely to take place in 2080.

An astronomer in the Planetary Science Division at National Aeronautics and Space Administration (NASA) Headquarters in Washington Henry Throop said, “The date of the conjunction is determined by the positions of Jupiter, Saturn, and the Earth in their paths around the Sun, while the date of the solstice is determined by the tilt of Earth’s axis. The solstice is the longest night of the year, so this rare coincidence will give people a great chance to go outside and see the solar system.”