This bridge is built in line with China’s Hangzhou glass bridge. It is 85ft long and 6ft wide bridge, which will be able to accommodate 40 visitors at a time. 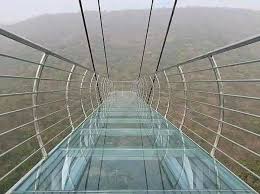 With this glass bridge, the state is hoping to increase the footfall of both domestic and International visitor.

Along with the glass bridge, Kumar also visited the nature jungle safari, which is the main attraction point of the Nalanda district.

Kudos to the efforts of #Nalanda Forest Division, @DEFCCOfficial for successfully executing the project under the visionary leadership of Honourable CM Shri @NitishKumar. pic.twitter.com/RRzbwPCDXD

Nalanda district in Bihar is one of the prime tourist hotspots in the state. This destination is historically and culturally rich and is home to the ancient Nalanda University, a UNESCO World Heritage Site. The University of Nalanda shot to fame during ancient times, and attained a legendary status for its contribution to education. Set around 95 km from Patna, the capital city of Bihar, the city is visited by a number of travelers from across the globe.

As per the report, the bridge will be opened to tourist on the New Year.