SunstarTV Bureau: Prime Minister of India and Bangladesh held a virtual summit and signed nine agreements in different fields with his counterpart Sheikh Hasina, on Thursday. 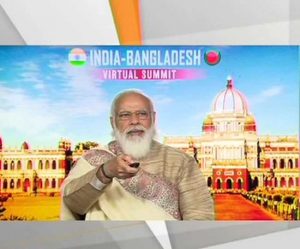 While addressing the virtual meeting, Prime Minister of Bangladesh, Sheikh Hasina remarked that many Indian were working in Bangladesh and were enhancing bilateral economic ties.

Both the PM inaugurated the Chilahati Haldibari rail link, which is the fifth rail link between the two countries.

Modi said, “Bangladesh is a major pillar of our ‘neighborhood first’ policy and it has been a special priority for me from Day 1 to strengthen our relations with Bangladesh. Today I pay my respect to the martyrs of our both sides who sacrificed their lives during the 1971 war which marked our victory against the anti-Liberation forces.”