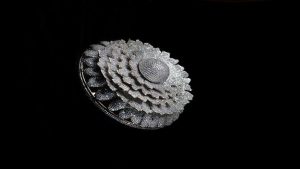 The ring named as ‘The Marigold-The Ring of Prosperity’. The chunky sporting is build of 12,638 tiny diamonds that weighs over 165grams.

While describing the ring, Harshit mentioned about his idea, he said, “I got the idea before two year ago while studying jewelry design in Surat.”

Each tiny petal in the ring’s eight layered flower design is unique, which attracts many prospective buyers.  But young Harshit still doesn’t have any plan of selling his pride ring.

The previous record in the field determined by Guinness was also set in India which was for a ring containing 7,801 diamonds.