In the letter, Swamy wrote that an over whelming majority of the youths of India demand that some of the words in the National Anthem ‘Jana Gana Mana’ be replaced by the one composed and sung the INA, on the occasion of the declaration of India’s Independence on October 21, 1943 after Subash Chandra Bose led capture of Imphal, the capital of Manipur.

He also mentioned that in Tagore’s national anthem, such as ‘Sindh’, raise ‘unnecessary doubts’ and was ‘inappropriate for post-1947 independent India’.

Swamy hoped that the government would carry out the necessary changes by 26 January 2021.

My letter to PM Modi on Jana Gana Mana pic.twitter.com/qc1KnLDb2g

The MP also referred to the concluding remarks by former president Rajendra Prasad on 26 November 1949, in which he had said that words in the national anthem may be amended or replaced in future.

The INA anthem, which is said to be the Hindustani version of the Bangla poem written by Tagore, is called ‘Subh Sukh Chain’. Bose, along with two of his generals Mumtaz Hussain and Colonel Abid Hasan Safrani, had translated Tagore’s poem and created the ‘Subh Sukh Chain‘ and Captain Ram Singh Thakur had given its tune. The 55-second-long anthem was also known as the ‘Qaumi Tarana’.

While Tagore’s version has five stanzas, the one adapted by Bose contains three. The first stanza of ‘Jana Gana Mana’ is used as the national anthem and should ideally be sung in 52 seconds. However, the first stanza of the INA anthem takes about 55 seconds to sing. 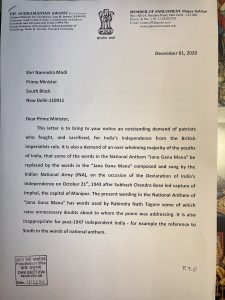 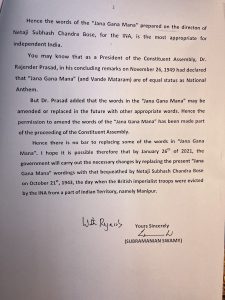 Know how to turn off Coronavirus caller tune

Know how to turn off Coronavirus caller tune