SunstarTV Bureau: United States has announced a reward up to 5 million ( Rs 37 crore) for information leading to arrest or conviction of Lashkar-e-Tayyiba member Sajid Mir for his ‘role’ in the 26/11 Mumbai attacks in 2008. 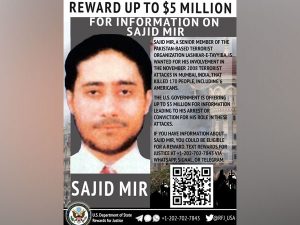 “Sajid Mir, a senior member of the Pakistan-based foreign terrorist organization Lashkar-e-Tayyiba (LeT), is wanted for his involvement in the November 2008 terrorist attacks in Mumbai, India. The Rewards for Justice program is offering a reward of up to USD 5 million for information leading to the arrest or conviction in any country of Sajid Mir for his role in these attacks,” stated US Rewards for Justice program, in an official statement.

On November 26 in 2008, 10 terrorists, from Pakistan-based terrorist organisation LeT, carried out coordinated multiple attacks in Mumbai-the Taj Mahal Hotel, the Oberoi Hotel, the Leopold Café, the Nariman House, and the Chhatrapati Shivaji Terminus. The heinous attack took at least 220 lives including tourists, natives and security personnel.

In these gruesome attacks, nine terrorists were killed and the lone survivor, Ajmal Amir Kasab, was caught and sentenced to death. On November 11, 2012, Kasab was hanged at Yerwada Central Jail in Pune.