SunstarTV Bureau: Cyclone Nivar is barreling towards the southeastern coast and expected to make landfall this evening between Mamallapuram in Tamil Nadu around 56Km from Chennai and Karaikal in Puducherry.

Nivar will bring exceedingly heavy rainfall and wind between 120 and 130 km per hour, with gusts of up to 145 km per hour. 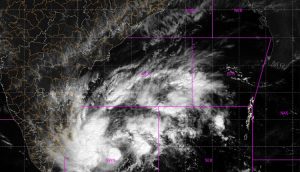 The Indian Meteorological Department (IMD) said, large gatherings have been banned and public movement is prohibited from 9 PM to 6 AM on Wednesday and Thursday.

Fishermen have been advised not to venture into the sea, while people in coastal areas are also being evacuated to shelter houses.

According to the guideline, non-essential shops and services has been shut, only milk booths, fuel stations, hospitals and pharmacies, and government offices will be allowed to open.

An additional 20 teams will be on standby in Odisha’s Cuttack, Vijaywada in Andhra Pradesh and Thrissur in Kerala.