SunstarTV Bureau: Team India is going to wear the retro kit of 1992 World Cup for their three-match One Day International (ODI) series against Australia starting from November 27. 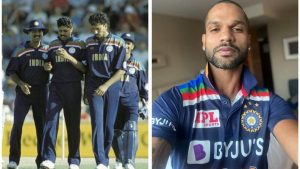 Indian opener, Shikhar Dhawan shared a glimpse of India’s new ODI jersey which is similar to the one worn during the 1992 World Cup in Australia and New Zealand.

The kit is of navy blue color and has colored stripes on the shoulder and has the names of Team India’s new principle sponsors Byju’s and kit sponsors MPL.

This ODI series will mark India’s first limited-over fixture in close to 9 months. The last ODI played was against New Zealand in February this year. Their fixtures against South Africa, Sri Lanka and Zimbabwe had to be cancelled due to the Covid-19 pandemic.