Mumbai: National news channel Republic TV’s owner was arrested by Maharashtra Police on 4 November 2020, in interrelation with a suicide case of an architect and his mother over alleged non-payment of dues by Goswami’s Republic TV, a police official said. Other two suspects Feroz Shaikh and Nitesh Sarda, have also been arrested.

What is the case about?

In May 2018, interior designer Anvay Naik, along with his mother Kumud Naik, was found dead at their bungalow in Alibaug. The post mortem report gave a deviant angle to the case. While Anvay was found to have committed suicide, Kumud’s report indicated death due to strangling.

The assumption was made that Anvay must have killed her before committing suicide. Following that police registered an accidental death report and a case of murder. Kumud’s body was found lying on the floor’s sofa, Anvay’s body was hanging in first floor. The caretaker of the bungalow was first to have reached at the scene.

Why Arnab Goswami is a prime suspect?

The police had recovered a suicide note written by Anvay stating the reason of  his death that he and his mother were forced to take this unavoidable step on account of huge amount of payments due not being cleared by the owners of three companies- television journalist Arnab Goswami of Republic TV, Feroz Shaikh of IcastX/Skimedia and Niteish Sarda of Smartworks.

An officer said that during the investigation they found that Anvay was in neck full of debt and was struggling to repay money to the contractors. 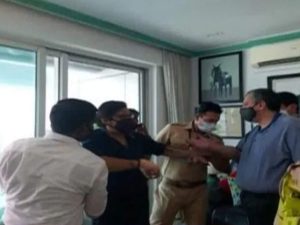 Raigad police also found that Naik had an NC registered against a contractor in Mumbai after threatening him to repay the money he had taken. Gosowami however, made these claims null and void.

What did the primary investigation reveal?

The local Raigad police in charge of the investigation closed the case in April 2019, stating lack of evidence against the accused including Goswami.

However, in May this year, Anvay’s daughter approached the Maharashtra Home Minister, Anil Deshmukh seeking the case to be reopened. Deshmukh had tweeted in May, “Adnya Naik had complained to me that Alibaug Police had not investigated non-payment of dues from Arnab Goswami’s Republic which drove her entrepreneur father and grandma to suicide in May 2018. I’ve ordered a CID re-investigation of the case.”

Adnya Naik had complained to me that #AlibaugPolice had not investigated non-payment of dues from #ArnabGoswami‘s @republic which drove her entrepreneur father & grandmom to suicide in May 2018. I’ve ordered a CID re-investigation of the case.#MaharashtraGovernmentCares

Adnya had also blamed that the police had not investigated the angle of Rs 83 lakh that Goswami had not paid her father, which drove him to commit suicide.

While the Home Department had transferred the case to CID in May this year, officers outside Arnab’s residence Wednesday said the court where the Raigad police had filed a closure report has given permission to Raigad police to reopen the case now. CID officials however have stated not having any case against Goswami.

Where the case is leading to?

The Maharashtra Police will be questioning Goswami along with Feroz Shaikh and Nitesh Sarda to provide their claims that they have cleared the payment due to Anvay. Depending on the advancement of the investigation they will decide to either close the case or charge sheet them.

A court in Alibaug rejected the police’s demand for 14-day custody but also dismissed Arnab Goswami’s charge that he had been physically assaulted while being arrested, an allegation he made several times in the day.