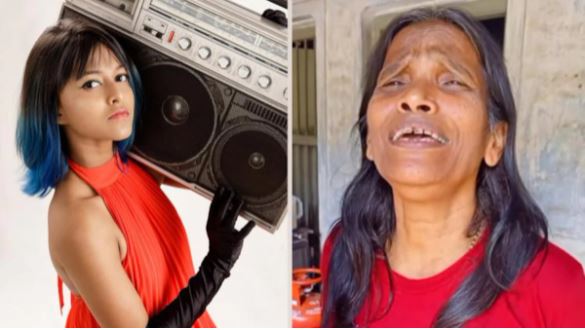 Bhubaneswar (SunstarTV Bureau): Two years ago, Ranu Mondal sang an iconic song ‘Ek Pyaar Ka Nagma Hey’ of legend Lata Mangeshkar’s at Ranhat railway station in West Bengal and became an internet sensation overnight. Later she was soon invited to a reality show in Mumbai. Fortunately, Himesh Reshammia, asked Ranu to sing for his film ‘Happy Hardy and Heer’. Now once again Ranu Mondal, who has become popular with audiences for her unpredictable style of voice, has once again become the talk of the town.

Notably, an engineer Atindra Chakraborty was impressed by the voice of Ranu, who has been begging at the railway station till 2019. Ranu’s video of her singing on social media was shared by 2.5 million people in just a few days. Himesh Reshammiya then decides to give Ranu a chance on a reality show in Mumbai. Even then, Ranu sang ‘Teri Meri Kahani’ of Himesh Reshmiya’s movie ‘Happy Hardy and Heer’.