SunstarTV Bureau: After conducting a sting operation, the Narcotics Control Bureau (NCB) on Saturday arrested two Indian and two British nationals, and at least 200 Kg ganja was recovered from one courier in Bandra West. 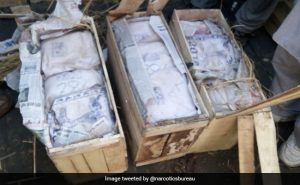 Among the Indian nationals arrested, one has identified as actress Dia Mirza’s ex-manager Rahila Furniturewala while the second one is Rahila’s sister Shaista.

According to NCB’s given statement, “Total contraband seized was approximately 200 kg. was packed in the form of pre-rolled Ganja Joints by Karan Sajnani and was marketed to high-class clients in Mumbai and various other states. The smuggling activity was supported by Rahila Furniturewala by providing financial and other aids.”