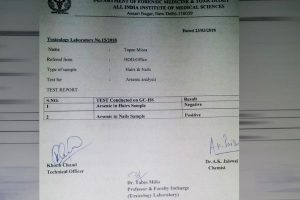 According to Mishra’s claim, on May 23, 2017, during a promotion interview at ISRO headquarters, unknowingly had consumed the fatal dose which was probably mixed with chutney along with Dosa, in snacks after lunch.

He also posted the medical report on the social media to claim he has been diagnosed with Arsenic toxication by the AIIMS, New Delhi.

However, there was no immediate response from ISRO over Mishra’s claims.