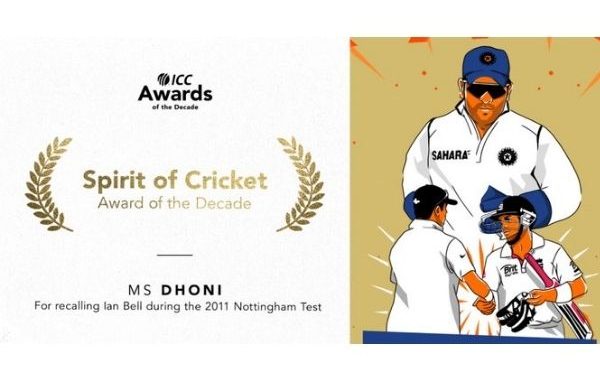 The former India skipper was chosen by fans unanimously for his gesture of calling back England batsman Ian Bell after a bizarre run out in the Nottingham Test in 2011, stated International Cricket Council.

The former India captain was chosen by fans unanimously for his gesture of calling back England batsman Ian Bell after a bizarre run out in the Nottingham Test in 2011.#ICCAwards | #SpiritOfCricket pic.twitter.com/3eCpyyBXwu

There are two other Indian players to make it to the list of the ODI team of the decade and that is Virat Kohli and Rohit Sharma. India, with three players on the list, leads the playing XI.

India captain Virat Kohli on Monday was named ICC ODI Men’s Cricketer of the decade. Whereas, Rohit Sharma being included in the team, makes India the country with highest number of players in the world’s top XI cricket team.

The ICC Men’s ODI Team of the Decade:

There are two Australians in the list in the form of opening batsman David Warner and fast bowler Mitchell Starc.

The only other country to have more than one player in the list is South Africa. Batsman AB de Villiers and spinner Imran Tahir have made it to the list from the Proteas.

The other players in the list include all-rounder Shakib Al-Hasan from Bangladesh. He has been rewarded for his overall skills as he has led the all-rounder list for most of the decade.

The only Englishman to make it to the list is Ben Stokes, who was the hero during the 2019 World Cup and played a key role in England winning its maiden trophy.

Fast bowler Trent Boult is the only New Zealand player to make it to the list, with Sri Lanka’s Lasith Malinga being the final member of the playing XI.

India skipper Mithali Raj and fast bowler Jhulan Goswami made it to the ICC Women’s ODI Team of the Decade. The side is captained by Australia veteran Meg Lanning.

The ICC Awards of The Decade recognises the best players across Cricket over the past 10 years, invited fans to vote for the first time by selecting the winners across categories including the Sir Garfield Sobers and Rachael Heyhoe Flint Awards, which celebrate the best overall player from the men’s and women’s game over the past decade.

Fans provided 100% of the vote for the ICC Spirit of Cricket Award of the Decade, from a list of the past winners since 2011. More than 1.5 million fans from across the globe participated casting 5.3 million votes.