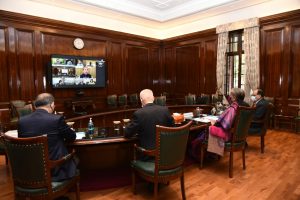 The meetings will be held virtually in connection with the forthcoming General Budget 2021-22, which is likely to be presented by Sitharaman on February 1 next year, informed Ministry of Finance.

The Finance Minister traditionally meets various stakeholders, including economists, industry leaders, farmers, and other civil society members as part of the pre-Budget consultation talks to chalk out necessities of the nation’s Budget.

The proposals are discussed with the Prime Minister Narendra Modi, following which the final call of the Budget is taken.