“Hats off to all of you, farmers have created a new history. This history would be narrated to future generations. Farmers’ issues shouldn’t be diverted by anyone,” Diljit said while addressing protesting farmers. 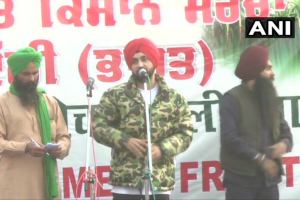 Earlier, a spat was seen between Diljit and actress Kangana Ranawat over a derogatory tweet by her, “Ha ha ha she is the same dadi who featured in Time magazine for being the most powerful Indian…. And she is available in 100 rupees. Pakistani journo’s have hijacked international PR for India in an embarrassing way. We need our own people to speak for us internationally.” The actor deleted the tweet after it was pointed out that the two women were not the same.

Including, today the farmers have been protesting for ten days in demand of scarping Center’s farm laws.

“We do not want corporate farming. The government will benefit from this law, not the farmer,” Farmers told to the centre, at the fifth round of talks over farm laws.

Hats off to all of you, farmers have created a new history. This history would be narrated to future generations. Farmers’ issues shouldn’t be diverted by anyone: Singer-Actor Diljit Dosanjh addressing protesting farmers at Singhu border https://t.co/NrXfCAyBdI pic.twitter.com/u8w7v5w2r9

We have material with us to last a year. We’ve been on road for past several days. If government wants us to stay on road, we’ve no problem. We won’t take path of non-violence. Intelligence Bureau will inform you what we’re doing at protest site, further added the agitating farmers.