SunstarTV Bureau: The Alibug police submitted a chargesheet of 1914 pages is filed against Republic TV’s Arnab Goswami along with two other businessmen for crumbling interior designer, Anway Naik’s financial position which led him to commit suicide. 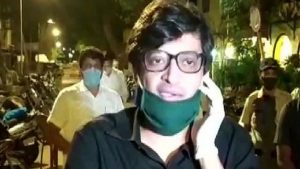 The chargesheet was filed a day after Arnab moved to Bombay high court seeking a stay on the probe and filing of the chargsheet, on Friday.

The case was based on a suicide note, which stated that 53-year old interior designer, and his mother decided to commit suicide as payment of Rs 5.4 core due to them were not being cleared by owners of three companies- ARG Outlier (Republic TV operator), Feroz Shaikh of IcastX or Skimedia and Neetish Sarda of Smartworks.

The chargesheet stated that the three accused had given contract work of interior designing, civil and electrical work, plumbing and engineering consultancy for their respective offices as per the work order.

It mentioned, “The deceased had done all the work as the work order. The accused gave additional work which the deceased completed. Seeing the extra work it was necessary to make changes in the bill of quantity but the trio made him work extra and paid him less.”