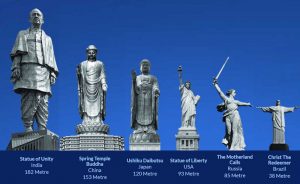 This massive 182m tall structure is the tallest statue in the world, located on the bank of Narmada River in Gujrat and inaugurated by Prime Minister, Narendra Modi in October 2018.

The Statue of Unity is a colossal statue of Indian statesman and independence activist Vallabhbhai Patel, who was the first Deputy Prime Minister and Home minister of independent India and adherent of Mahatma Gandhi during the non-violent Indian Independence movement .It is one of the India’s most priced developments project till now.

Both the Statue of Unity and Statue of Liberty have meaning far beyond the comprehension.

Under the guidance of Prime Minister Modi, the town has been developed as a tourist destination for the entire family while preserving its ecology and local heritage.