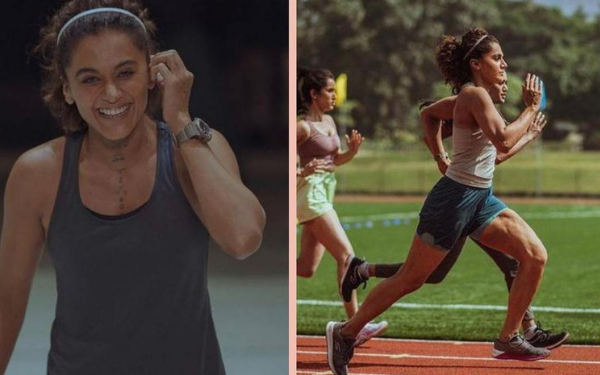 SunstarTV Bureau: ‘Pink’ actress Taapse Pannu is coming up with a new sports drama ‘Rashmi Rocket,’ which is expected to release sometime in 2021.

In this film, Taapse will be seen playing the role of Rashmi, aspiring to become a runner. You can also find actor Priyanshu Painyuli bringing the role of Taapse’s husband into life.

On Tuesday, she shared a picture from the film where she is seen participating in a track and field event with other girls. She added that she would soon begin work on her next film, ‘Loop Lootera’.

Sharing the picture, she wrote: “The boot camp like schedule 1 gets done, now running towards the lola family. Going to have a very chill cool stopover with the looopers. The best unwinding I could’ve asked for! This is going to be ‘crazy’ fun. #RashmiRocket to #LooopLapeta.” The picture stood out also because it showed how Taapsee has transformed her body to look like an athlete, with her muscular frame doing the talking. Her leg muscles are all flexed

The film is directed by Akarsh Khurana and Co-produced by Ronnie Screwvala, Neha Anand and Pranjal Khandhdiya.

Director Khurana has mentioned, ‘‘Rashmi Rocket’ is about a runner from Rann of Kutch who fights for identity and becomes an athlete.’

Taapse is known for choosing hefty scripts and leaving an astounding impression each time she comes to screen. Some the of most appreciated movies of Taapse are Pink, Mulk, Thappad, Nam Shabana, Badla, Pink, Manmarziyaan, Baby and Game over.