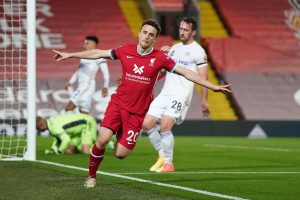 Liverpool produced a fanciful performance and achieved success that helped secure a slice of history, pushing it forward for the second table. Liverpool’s previous record of 63 matches unbeaten in the league at Anfield was set in December 1980, the run having started more than two years earlier in February 1978

With his first-half strike against the Foxes  the Portuguese attacker,  set a new Anfield mark and became the first player in Liverpool history to score in his first four top-flight home matches following his opener against Leicester City.

Jota enjoyed an exciting start to life at Anfield, following his £41 million($53m)  moves from Wolves in pre-season. Jota had scored seven goals in 11 matches for the team across all competitions before the match against Leicester. Liverpool also tweeted that with this dominating win, it also smashes a new club record for their longest unbeaten streak at home.