UAE (SunstarTV Bureau): The greatest festival of India, IPL has come to an end with Mumbai Indians(MI) being the only standing team in IPL to lift the trophy for the 5th time by defeating Delhi Capitals(DC) by 5 wickets. 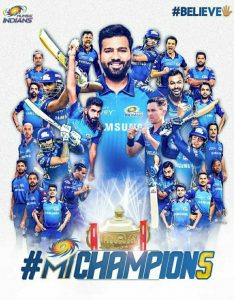 While Rohit Sharma led MI is the most successful team in IPL history with prior four titles to their name, DC under skipper Shreyas Iyer had made its maiden appearance in an IPL final.

Mumbai Indians vs Delhi Daredevils was a mouth-watering clash for many cricket enthusiasts not just in India but around the world.

DC had charged themselves up with loud claps by winning toss and deciding to bat first. By the end of 3rd over itself DC had lost 3 wickets, building up the pressure high. But by the end of 20 overs managed to pull up a decent score of 156, with a blustering partnership of Rishab Pant and Shreyas Iyer losing 7 wickets.

But, skipper Hitman Rohit led MI to the way of victory by smashing a monstrous sixty eight. He had a commanding partnership with Ishan Kishan and Suryakumar Yadav.