SunstarTV Bureau: Chicken sales are been dipping by 50-75 percent across the Bihar, amid to the fear of Bird flu or avian influenza.

A chicken seller at Boring Road in Patna, said that though no confirmed case of bird flu has been reported from anywhere in the state, customers are not coming to their shop. 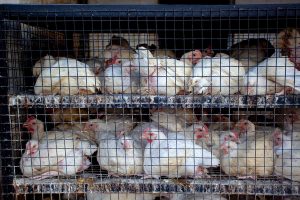 “Customers are apprehensive about bird flu due to news reports on digital platforms, TV channels and newspapers. Only the known customers are coming to our shops to buy chicken,” Chicken seller said.

Chicken sellers are feeling the heat in other districts of the state as well.

The scare of bird flu gripped Bihar after chickens and crows were found dead in Mujaffarpur and Bettiah, respectively, last week.

Even the hygiene factor is always a big issue in meat outlets in Patna. The flu could also transmit through feathers and other wastes which are generally scattered in the surroundings of roadside chicken shops.

As majority of the outlets are operating without any licence from the municipal corporation, they do not have the fear of getting punished.

The state government has also alerted the administrations of all the 38 districts in Bihar to keep a tab on the developments.

“We are urging people to avoid eating half-cooked non-vegetarian food. Any meat cooked at a temperature of above 70-degree Celsius is safe as the H5N1 virus does not survive then,” an official of the health department said, requesting anonymity.