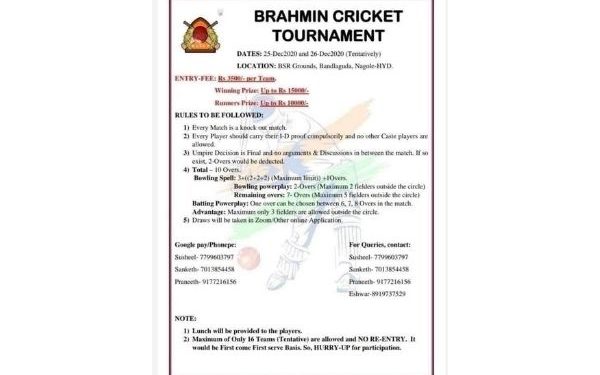 SunstarTV Bureau:  A poster of a cricket tournament in Hyderabad went viral on social media as it mentioned a unique name called ‘Brahmin Cricket Tournament’.

Cricket which is itself a religion in India knows no other religion but this Hyderabad tournament had a unique condition that every participating player must be a Brahmin by caste.

The poster of this tournament, which happened at the BSR Cricket Grounds in Hyderabad’s Nagole mentions some terms including carrying of an ID proof so that the caste of the player is verified.

A exclusive tournament to assert the #brahmin_merit with the support of the brahmin State. pic.twitter.com/uqoIBJF1a9

This poster went viral on Twitter and did not go down well with the users. Some slammed the caste system that still thrives in 2020 while a few questioned the administration for allowing such a tournament.