SunstarTV Bureau: Bargarh district administration is repeatedly getting complaints from the farmers for the irregularities in the paddy procurement process.

Token system has also been made compulsory for the farmers at the time of entry in the Mandis, but it is alleged that many famers have been deprived of tokens. 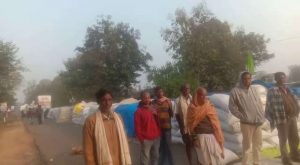 According to the sources, many farmers across the district are spending sleepless night in the teeth biting weather to protect their paddy in the mandis.

On the other hand, some of the farmers have got tokens, but their paddy is not yet procured as no millers have come forward to lift paddy.

Laxman Pradhan, a farmer at Sarakanta Mandi, said, “I have got my token. But my paddy has not been procured due to the absence of millers. I have to spend sleepless night in this chilly weather to protect my produces as there is a fear of theft.”

Even, after multiple attempts by farmers to convey their plea, administration still has turn deaf ear towards farmers’ grievances.