SunstarTV Bureau: For the first time, Chhattisgarh police sniffer dog ‘Ruby’ has bagged the ‘cop of the month’ award for her commendable breviary service in the Raigarh district, Raipur. 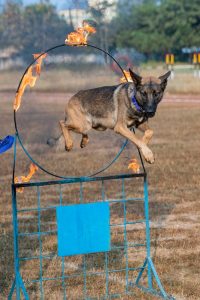 The female Belgian Shepherd dog has trained to use its senses and has often turned crucial for law enforcement purpose, which made her receive the most prestigious award with its handler.

Santosh Kumar Singh, Raigarh SP, said, “First time, the police sniffer dog has been awarded ‘cop of the month’ along with two other personnel. Ruby was instrumental in solving more number of sensational criminal cases including a key robbery linked to the Sarangarh Royal Giri Vilas Palace from where antique silver trays worth several lakh rupees were stolen. The vital clues provided by the trained canine were of tremendous help to the police department”.

No Zero night celebration in Bhubaneswar