SunstarTV Bureau: Commissionerate police recovered a hefty amount of arms and ammunition from the house of gangster brothers Sushant and Sushil Dhal Samanta at CDA, on Friday. 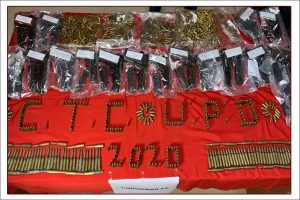 Ill-famed as D-brothers, the gangsters are in jail since 2016. The recovery of the arms and ammunition lends credence to the allegations that they continue to be active in running their crime syndicate from behind bars.

The seized arms and ammunition include 13 numbers of 9mm pistols, three 7.65mm pistols, 1,095 live bullets of different types, 24 magazines along with 16 mobile phones and four bikes.

Police have also arrested eight persons in connection with the illegal arms supply racket which is also a part of the crime network of the gangster siblings.

Commissioner of Police, Sudhanshu Sarangi stated, a raid was conducted basing on the information shared by an arms peddler Prakash Behera, who was arrested by a special team of Choudwar Police on Thursday.

Prakash of Sheikh Bazaar was earlier arrested for his links with D-brothers in 2016. Out on bail, he had again got involved in supplying arms to local gangs and criminals in the city.

During inquiry, Prakash revealed that he was to sell the weapon to one Sarat Sethi alias Budhia of Deula Sahi area of the city.

Prakash also revealed that he had supplied fire arms and ammunition to gang members in Jagatsinghpur and other parts of Cuttack district. He also disclosed that the arms and ammunition were kept in a wooden cell concealed within the walls of the house of Dhal Samantas.

The special team of police broke open wooden secret chambers concealed beneath the staircase and also behind the interior designs in the house, where they recovered the guns, bullets and other weapons.

Commissioner, Sarangi said, “We suspect more firearms might be hidden within the interiors of the house. Despite being in prison, the duo are reorganising their gang and supplying arms to their associates to carry out crime. We will bring both Sushanta and Sushil in remand for further investigation into their crime network”.