SunstarTV Bureau: A week after the mysterious contamination broke out in Andhra Pradesh’s Eluru which has so far killed two and sickened over 600 people, found several abnormalities in the food that the victims consumed. 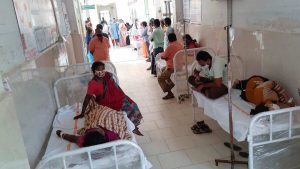 The state government is going through the reports, as well as Andhra Pradesh Chief Minister, YS Jaganmohan Reddy on Friday held a video conference with medical experts in Amaravati.

On Friday, only four cases were reported taking the cumulative tally to 613. Among them, 13 are under treatment while the rest have been discharged.

Two people admitted in similar symptoms and died on December 10 but the state said they had other health complications. However, it’s not yet clear what exactly caused the strange outbreak.

After analysis carried out by various group of experts, they found several abnormalities in report.

AIIMS and Indian Institute of Chemical Technology found lead and nickel in blood samples of the victims, but they didn’t find anything in the water.

National Institute of Nutrition found traces of mercury in rice and pesticides and herbicide residues in excess quantities in vegetables. It also found residues of organ phosphorous in blood, but said it has to be studied how they entered the humans.

A study of ambient air quality and water, conducted by the Andhra Pradesh Pollution Control Board, revealed no presence of heavy metal in water.

The Institute of Preventive Medicine, in its analysis, found no heavy metal in milk.

Though water contamination is being ruled out in the initial findings, the CM has asked experts to test drinking water samples repeatedly as a Vijayawada based private laboratory indicates that the drinking water supplied to areas like Gandhi Colony, Ramachandra Rao Peta, Pension Line Area and J P Colony contained high quantities of various pesticide residues, thousands of times more than the permissible limits.

Organ chlorine and organ phosphorous poisoning can occur from indiscriminate use of pesticides and insecticides.

The state government has also constituted a 21-member multi-disciplinary committee, headed by Chief Secretary, Nilam Sawhney, to probe the source of the infection thoroughly.

On December 5, the first case of this illness with symptoms like seizures, giddiness, and froth in mouth was reported. Soon, many people reported similar symptoms needing emergency medical intervention