SunstarTV Bureau: After a mysterious appearance of monolith in the American states of Utah and California, and Romania now it is spotted on the Isle of Wight. 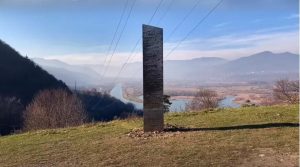 These mysterious tall, shiny pillars have been found at sites around the globe without warning or explanation since mid-November.

This large stone first appeared in the US, when a helicopter crew flying over a remote part of a Utah desert counting sheep spotted a strange statue below on November 18 and then mysteriously was disappeared from the place on November 27.

At the same time as the Utah one vanished, a mirrored object was again spotted on the other side of the globe in the Romanian hillside and in the same mysterious way that also disappeared after seven days from that place.

After some days it was again spotted near a local archaeological landmark in the Neamt country and then, a new one at the top of a mountain trail in southern California.

Every time when the authorities, were speculating the reason behind the large mirrored object, it just get disappeared.

Some reports relates these mysterious situation with the controversies relating aliens and UFO going on, an anonymous collective called The Most Famous Artist has taken credit for the Utah and California statues, and is selling three replicas for $45,000 each.

However, when they asked about the Isle of Wight structure, it said, “The monolith is out of my control at this point. As all the aliens are working hard around the globe to propagate the myth”.

What is the significance of ‘Monolith’?

Monoliths are frictional machines those are built by an unseen extraterrestrial species in a novel of Arthur C Clarke’s Space Odyssey.

In the series of novels, three Monoliths are discovered in the solar system by hominids and humans.

The recent occurrences of the monoliths in various places is creating buzz on the social media platforms.