SunstarTV Bureau: Sony Pictures Sports Network (SPSN), the official broadcaster of India tour of Australia, is all set to broadcast the upcoming 3 T20I matches between the Australia and India, from December 4, 2020. 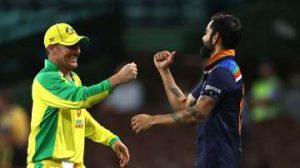 Cricket lover are all set to enjoy the T20I, which will be followed by the much awaited 4 Test matches for the Border-Gavaskar Trophy.

The T20I matches will be aired LIVE on SONY TEN 1 in English, SONY TEN 3 in Hindi and SONY SIX channels in English, Tamil and Telugu from 12.30 pm IST.

The second white ball series will be a tight knit contest as both teams will take on the field with renewed focus and motivation to turn the tide in their favor ahead of the all-important test matches.

After bagging victory in the 3rd match in ODI, where team India grabbed its first win of the tour. We hope India will maintain its rhythm leading to the three T20I match.