SunstarTV Bureau: Even after 36 years of the Bhopal Gas Tragedy- one of the most lethal industrial disaster in the history, the effect is still raw in the memories and physical condition of the people affected. 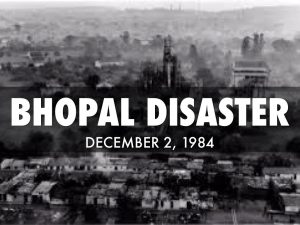 Whole Story Behind the Tragedy

The Bhopal disaster happened at a Union Carbide subsidiary pesticide plant in the city of Bhopal, India. On the night of 2-3 December 1984, the plant released approximately 40 tonnes of toxic methyl isocyanate (MIC) gas, exposing more than 500,000 people to toxic gases.

A mixture of poisonous gases flooded the city, causing great panic as people woke up with a burning sensation in their lungs. Thousands died immediately from the effects of the gas. Many were trampled in the panic that followed. The first official immediate death toll was 3,598 in 1989. Another estimate is that 8,000 died within two weeks, that an additional 8,000 have since died from gas-related diseases.

Still the justice is waiting for the tragedy. Several rights organisations have been, demanding harsh and exemplary punishment to those responsible for the tragedy, adequate compensation to the victims, a proper rehabilitation plan and adequate medical facilities for survivors and removal of toxic chemicals lying on the plant premises among other things.

Eight accused, were the working members of the plant and allegedly responsible for the leakage. They were convicted for two-year imprisonment and a fine of Rs 1.7 lakh each by a Bhopal court in the first week of June in 2010. Still government is not solving this tragedy yet.

As per a state government affidavit filed in the court in the year 2006, the tragedy had killed 3,787 people and affected more than 5.58 lakh in the state capital after toxic gas leaked from erstwhile Union Carbide factory. However, the organisations fighting for the victims claim the tragedy has killed at least 25,000 people.

Rachna Dhingra, founder member of Bhopal group of information and action stated, “Nothing has changed for the survivors irrespective of the political party in power whether it’s in Madhya Pradesh or at the Centre. It’s always been the interest of the erstwhile Union Carbide and now Dow Chemical, and not the interest of the gas tragedy victims, which has dictated the policies of the governments.”

One of the victim Jagdish Dubey, said, “Observing Bhopal Gas Tragedy anniversary has become a ritual for us as well as the government. There is lip service by the authorities that they would look into our problems and then nothing happens. Then, there is another anniversary next year.”