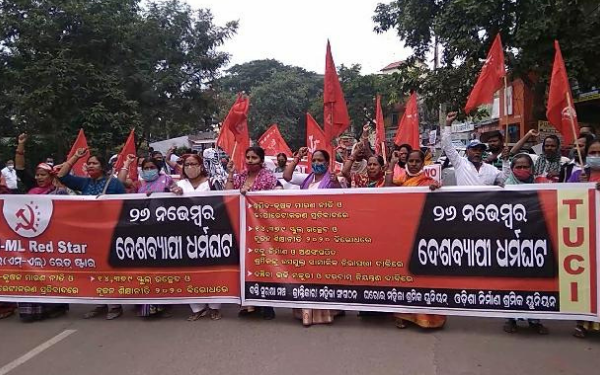 SunstarTV Bureau: To protest against various policies of the central government, the central trade unions have called for a nationwide strike. Odisha has also felt the huge effect of this strike, with the support of Congress, youths, women and other trade associates.

As many as ten trade unions are staging ‘Bharat Bandh’ across the country. The nationwide strike has begun at 6 am today. Picketing has started in a non-violence manner at various places, across the state.

Hundreds of vehicles stranded on both sides of the road at such places due to the blockades.

This strike is to protest against the new farm and labour laws, among others, as well as to raise various demands.

The trade unions are demanding withdrawal of farmer laws and labour policies of the Central Government, cash transfer of Rs 7,500 per month for all non-income tax paying families and 10 kg free ration per person per month to all needy, stopping of privatisation of public sector.