SunstarTV Bureau: Comedian Bharti Singh and her husband Harsh Limbachiya are sent to judicial custody till Dec 4, after being interrogated by the Narcotics Control Bureau (NCB) for several hours.

NCB had raided production office and house of comedian Bharti Singh & from both the places recovered marijuana of weight 86.5 gms, yesterday.

After the news of her arrest came out, Bharti’s old tweet based on awareness against consumption of Tabaco, became source of amusement for social media users. 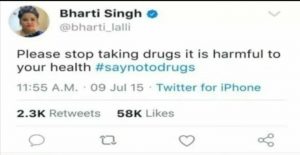 Both Bharti and her husband Harsh Limbachiya accepted consumption of Ganja.