(SunstarTV Bureau): Goa, the dream destination of every Indian has turned into a battle ground for over 5,000 Goans.  The night of November 1, 2020, witnessed unedifying determination of Goans to protect their wildlife heritage.

A crowd comprising of students, women, senior-citizens along with others assembled near the level crossing at Chandor, a village in South Goa. From 10.30 pm to 4 am they demonstrated against the double tracking of the South Western Railway line. The night echoed with chants and songs – an ode to the strong collective vision of Goa’s rich ecology.

The Goa Police have filed an FIR and booked conveners of two NGOs — Goyat Kolso Naka and Goencho Ekvott for being the front face in unlawful assembly and wrongful restraint. 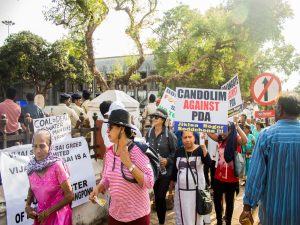 Confirming the sections, Pankaj Singh, South Goa SP said, “We will probe in detail. The sections for now are against the six conveners of the two NGOS.”

The double tracking of the railway line is amongst the three infrastructure projects that, the government is determined to implement in an ecologically fragile Goa.

What are the three projects that forced Goans to guard up?

The three projects threatening the forests in and around Bhagwan Mahaveer Wildlife Sanctuary and Mollem National Park in Goa are: the four laning of the NH4A, double tracking of the railway line and the laying of a 400kV transmission line. These projects will lead to the hewing of around one lakh trees in Goa and Karnataka, of which a minimum of 59,000 trees will be felled in Goa.

The railway and highway projects were two of the 30 projects passed by the Ministry for Environment, Forests and Climate Change (MoEF&CC) during the lockdown. The clearances were discussed and granted virtually, without an opportunity for proper scrutiny, assessment, appraisal and deliberation, in a clear violation of a meaningful engagement with the procedure established by the law. 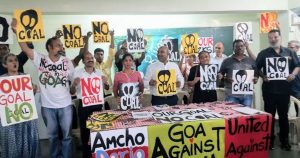 The process for granting environmental clearances in India is dependent upon the nature of the project, and accordingly referred to the National Board for Wildlife, the Forest Advisory Committee and the Expert Appraisal Committee. Further, there has been no cumulative assessment of all the three projects on the region.

A fragmented assessment cannot provide the clear impact that the region is going to face, and is mere lip service to the process of Environmental Impact Assessment (EIA).

The projects are touted as being in the best interest of Goa and Goans, where as the naked truth behind the fact is that neither are these projects by the government of Goa, nor are they for the residents of Goa. The projects are solely concentrated on filling the loaded pockets of corporate and to convert Goa into a coal transportation hub.

The Adani terminal at MPT (berth number 7) moves coal from MPT to other parts of India through the existing South Western Railway, as well as the NH17B highway. The NH17-B highway connects to the NH4A highway which moves through the Mollem region.

Are the projects pivotal for Goa?

Goa already meets more than enough of its power requirements from existing power sources, then why the need for the transmission line that has already led to the felling of 2670 trees?

Goa’s environment and power minister Nilesh Cabral has released a white paper on Goa’s electricity consumption, after a series of delays, which states that ‘historically, the load requirement for domestic consumers in Goa is more than double the load requirements of both commercial and industrial consumers put together.’ This statement harshly contradicts the 19th Electric Power Survey whereas the electricity demand projections for Goa for the year 2021-2022 show that domestic consumptions is just 26.91%, whereas the commercial and industrial consumption is 65.63%. The remaining 7.46% accounts for public lighting, irrigation, and so on.

What is the need of laying of the transmission lines then?

With the laying of the transmission line, Goa will have double the power that is its requirement.

Legal view on the Projects

It is clear that this is not for the people of Goa, it is for high tension industries. Moreover, if an EIA for the transmission line was conducted, it is not publicly available, which is a violation of the fundamental right to information under Article 19(1)(a) of the Indian constitution.

The forest clearance proposals for the two transmission lines and the approach road to substation, for which stage-1 forest clearance was granted on April 29, 2020, were on the Ministry of Environment, Forest and Climate Change’s web portal PARIVESH, but they have now disappeared. 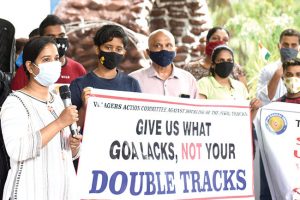 Moreover, the felling of 2,670 trees for the substation for the transmission line at Sangod is in clear violation of the Supreme Court’s order in 2015 whereas it directed that ‘No Objection Certificate(s)’ will not be issued in Goa for the conversion of any land of over 1 hectare that has natural vegetation with tree canopy density in excess of 0.1. The area of land cleared for the substation is 11.8 hectares and its canopy density is 0.7.

The clearances granted by the National Board for Wildlife to the railway and highway project are currently under challenge in the High Court of Bombay at Goa.

The fragmented implementation of the larger coal hub project is shrouded in secrecy at every stage, with the Major Ports Bill 2020 being the final curtain act.