Ashok Pati’s directed this movie’s poster have attracted many eyes. The poster unveils a unique representation of woman’s agony. Elina’s zero-angled picture depicting the emotions through her eyes, has created massive buzz among the cine fans. 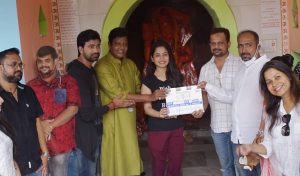 The poster is cut up into two parts yet has been collaged into one face of the protagonist, depicting different versions of women’s feelings.

The movie is featuring other veteran actors like Ashrumochan Mohanty and Pinky Pradhan. The uncommon title and woman centric story is written by story writer Sanjay and Chandan. The music is handled by pro Prem Anand.

Inspired by true events this movie is expected to stand out in the Ollywood.