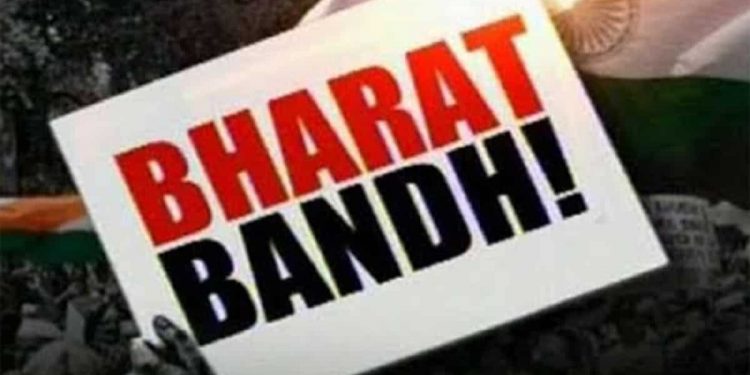 By holding placards and banners, members of the SKM staged protest on road, thereby vehicular movement erupted to severe blockade situation and hitted to normal people.

Hundreds of vehicles, especially trucks, were stranded on NH-16 in the state capital due to the blockade.

In view of the Bandh, the Odisha State Road Transport Corporation (OSRTC) has decided to halt bus services from 6 am to 3 pm.

Besides, the support of the protest in Odisha unit been supported by the Congress party, which call by farmers’ associations. The left parties have also extended their support for the strike.

The Odisha government has asked its employees of major offices in Bhubaneswar to reach office by 9.30 am. State’s Special Secretary, Home, Santosh Bala has advised Secretaries of all departments to ask their officers and employees working at the Lok Seva Bhawan, Kharavela Bhawan, Rajiv Bhawan and the heads of departments to reach office at least by 9.30 a.m. on the day of the protest to facilitate their smooth entry.

This direction was issued as the government apprehended that the protestors may stop vehicular and rail traffic, close down business establishments, and picket government offices, banks and educational institutions.

As a precautionary measure, the front gates of the Lok Seva Bhawan (State Secretariat) will be closed at 10.15 a.m. on that day and all the passage will be regulated through rear gates. However, the connecting gate between the Red Building and Main Lok Seva Bhawan will remain open, Bala said.

The government has restricted entry of visitors to these above office buildings on the strike day. Persons having prior appointment and have urgent meetings will be given entry passes on the recommendations of the department concerned by the Special Secretary, Home. The visitors will leave immediately after the meeting, she said.

All the employees have been advised to remain in their seats and attend to their duties without undue movement.

The agitated farmers are demanding the repeal of the three farm laws passed by Parliament last year and have expressed apprehension that they would pave the way for the dismantling of the minimum support price system, leaving them at the mercy of big corporate houses.

The government has maintained that the new laws will provide farmers with better opportunities. It has also accused the opposition parties of misleading farmers.