SunstarTV Bureau: The National Green Tribunal (NGT) has issued notice to the authorities of Rourkela Steel Plant (RSP), to submit the report over the leakage of gas at the Coal Chemical Department of the plant, by February 11. 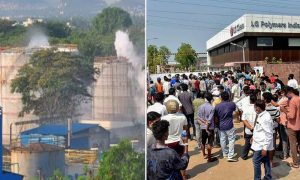 As many as four contractual workers died after inhaling toxic gas that leaked at the Coal Chemical Department of the plant on last Wednesday.

Around 15 workers were on duty at the site when the incident had occurred. Ten of them had fallen ill following the leakage of toxic gas from the plant. All were initially admitted to the dispensary on the plant premises. Sources said that the gas leaked at the coal chemical site of the plant following the sudden burst of the safety valve.

Amid the incident, the plant authorities had suspended two Deputy General Managers (DGMs) for dereliction of duty.

The plant authorities assured victims’ families of job to the next of the kin of every deceased in the plant and had directed the third party vendor who had employed the contractual workers in the plant to provide compensation of Rs 2.5 lakh to the families of each deceased