SunstarTV Bureau: While corona virus is continues to spread across the world, the emergence of bird flu became another reason to worry about.

According to official sources, several states in India, including Himachal Pradesh, Kerala, Punjab and Rajasthan are witnessing avian bird influenza which has already killed a lot of birds and forced the authorities to cull off thousands of other bird species. 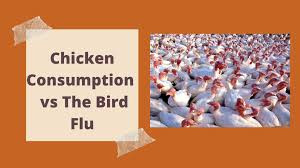 But, the World Health Organisation (WHO) has found no evidence that says avian flu can spread to humans if the meat is properly prepared and well cooked.

Whenever any meat or poultry produce is exposed to heat, it kills any germs, pathogens or viruses which may be present on the surface (or even beneath it). Hence, cooking your produce thoroughly makes it safer for use. This is also a precautionary step people should take before consuming any type of non-veg food.

Meanwhile, the fears about consuming meat during a bird flu outbreak are justified in the backdrop of the Covid-19 pandemic which is believed to have originated in a wet meat market.

The spread of bird flu to humans has been linked to slaughter and handling of diseased or dead birds, prior to cooking. “These practices represent the highest risk of human infection and are the most important to avoid,” WHO highlights.

Experts are also worried that the current strain of the infection, H5N1, considered to be the most lethal one, is also something that could turn into a pandemic if not controlled in time and preventive steps are taken. Government authorities, meanwhile, have also asked states affected by bird flu to ‘prepare for any eventuality’.

However, do remember that bird flu cannot spread from humans to humans. There have been rare recorded cases worldwide.

Upon infection, humans can go through a host of respiratory symptoms such as the ones caused by ARDS (Acute Respiratory Distress Syndrome) including cough, cold, chest pain, sore throat.

Should we wash eggs and chicken before use?

While many would feel washing produce under running water would wash away bacteria and germs, it might not be the case. A better way to do so would be to use a gentle paper towel to do away with the sliminess and then proceed to thoroughly cook it under suitable temperatures.

All India Institute of Medical Sciences also recommends that people follow precaution while buying eggs- do not buy the ones which are too stale. Ensure it is good for consumption and hygienic cooking practices are followed at all levels.

Even though cooking kills the germs, if you do go to a restraint to eat, or order in, try and ask for quality checks beforehand. Hence, one of the best ways to stay safe would be to adopt good measures on your own end and eat home-cooked food, as much as possible.

For example, while cooking an egg, ensure that the yellow yolk becomes firm and avoid eating runny eggs during the course of the outbreak.

Lastly, do remember that we are already in the middle of a wide-spread pandemic. Wash your hands with good quality soap and water for 20-30 seconds before and after cooking. As long as you follow good hand hygiene, take care of your source of produce and cook it well, there’s no real reason to worry.