Along with the PM, the Governor of West Bengal, Jagdeep Dhankhar and Union Education Minister, Ramesh Pokhriyal also present at the event. 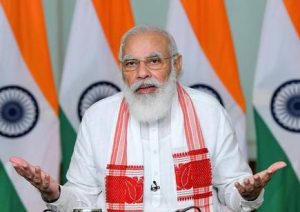 The University was founded by Gurudev Rabindranath Tagore in 1921. In May 1951, Visva-Bharati was declared to be a Central University and an Institution of National Importance by an Act of Parliament.

The University followed the pedagogy devised by Gurudev Tagore, though gradually it evolved in the format in which modern Universities developed elsewhere.

On this, occasion PM stated, “It is a great honour for me to be able to speak at this historic event, as Gurudev Rabindranath Tagore had started this great institution with the thought of education and knowledge for all. Today, as we celebrate 100 years of this prestigious institution, we take that thought forward to ensure a good education reaches all.