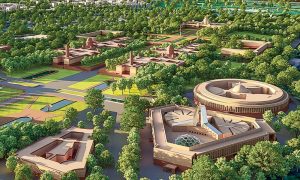 PMO, stated,  “The new building is an intrinsic part of the vision of ‘Aatmanirbhar Bharat’ and will be a landmark opportunity to build peoples’ Parliament for the first time after independence, one which will match the needs and aspirations of ‘New India’ in the 75th anniversary of independence in 2022.”

The ceremony will be followed by Harivansh Narayan Singh reading out messages from President Ram Nath Kovind and Vice President Venkaiah Naidu.

The triangular new Parliament building with modern facilities has room for MPs to sit in both Lok Sabha and Rajya Sabha. It will cost around Rs 971 crore and the construction is scheduled to be completed by August 2021.

LS Speaker Om Birla said, “There will be approximately 888 seats for Lok Sabha members and more than 326 seats for Rajya Sabha members in the new building. The Lok Sabha hall will be able to accommodate 1,224 members simultaneously. It will be 17,000 sq.m bigger than the old Parliament building and will be built in an area of 64,500 sq.m at an expense of Rs 971 core.”

The Lok Sabha Speaker remarked that the new building will be a ‘temple of Aatmanirbhar Bharat’ showcasing the diversity of the nation.