SunstarTV Bureau: Former national team cricketer, current BCCI President, Sourav Ganguly posses a magnetic quality of attracting controversies. After being appointed as the 39th president of Board of Control for Cricket in India (BCCI), he is reckoned less for a stellar career and more for being amidst the unwanted conflicts. 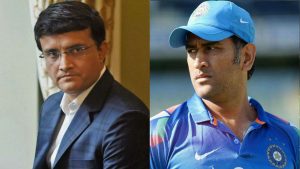 Many former Indian cricketers had thrown their weight behind former skipper MS Dhoni and had said that the veteran would hang up his boots when ever ‘He’ thought it was the right time to.

Former skipper Sourav Ganguly had implied on many occasions that the selectors and the skipper should take the call on MS Dhoni’s future.

According to media reports, Ganguly had a strong feeling regarding the partial behavior of the selectors and skipper Virat Kohli towards Dhoni. He had tried to pressurise them by saying that they were capable of doing so and hence should take a call on the Dhoni’s retirement.

Sourav Ganguly, had indicated his favoritism towards Virat’s captaincy, while Dhoni was still making the decisions.

Indian skipper Virat kohli however defended Dhoni by saying, “MS Dhoni always thought about the game from the team’s point of view and not individually”. In addition to it, Kohli revealed that MS Dhoni had a huge role to play in the grooming of the youngsters of the team. He said that the experience of the former captain was very essential for the team. 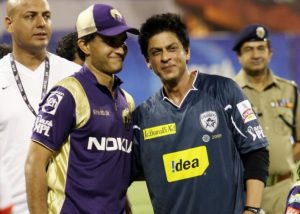 In 2008, Ganguly had captained Kolkata in the inaugural IPL. However, before the second season in South Africa, it was announced that KKR were going for an inexplicable multiple captaincy approach. A day before the tournament, Brendon McCullum took charge of the side.

However, fans of Ganguly had spoken aloud on his behalf and featured him as the victim of bureaucratical conspiracies.  The fans slammed KKR on many occasions. Finally, the team had to let loose of Ganguly that year. 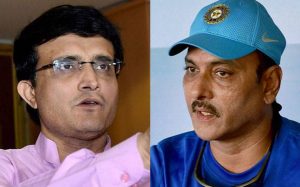 This one was the most stirring controversy that revolves around Ganguly. When the BCCI launched its hunt for a new Team India coach, the responsibility of selecting the candidate was given to the three-man Cricket Advisory Committee (CAC), of which Ganguly was a part of it. The controversy flared up when Ganguly did not attend Ravi Shastri’s e-interview, as Shastri was in Bangkok. Shastri lost out to Anil Kumble, he blasted ‘dada’ in public for disrespecting him and the job then was entrusted upon him.

In a reply, Ganguly questioned Shastri’s absence from the country for such important event and commented that he should have been in India instead. The controversy died its natural death after Kumble took over the position and both Ganguly and Shastri moved on. 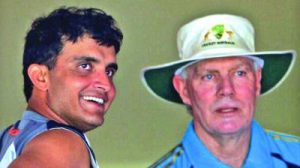 This is the mother of all Ganguly’s controversies. In 2005, there was a change of guard in the Indian team management as Greg Chappell superseded John Wright as coach. Ganguly was in the midst of a tough run with the bat and pressure was taking over him. During the tour to Zimbabwe, Chappell told him quite frankly that the pressure of captaincy was perhaps affecting his batting, in-turn affecting the team.

Ganguly hit a labored ton in the first Test and then told the media that he was asked to resign. The whole controversy then snowballed into a big affair as Greg. Chappell wrote an email to the board, detailing a saga of disagreements between him and Ganguly. Soon after the tour, Ganguly was dismissed as captain and dropped from the one-day side.

He spent about a year on the sidelines before he regained his spot. It remains one of the most acrimonious times in Indian cricket. Fans in Kolkata did not take this kindly and had cheered for the South African team during an ODI against a Dravid-led Indian side.