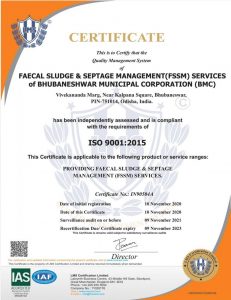 Bhubaneswar Municipal Corporation’s vision for Faecal Sludge and Septage Management in Bhubaneswar as per report is -‘The City becomes totally sanitized, healthy and livable and ensure sustenance of sanitation habits with improved Onsite Sanitation Services together with FSSM’.

The state government has taken pivotal measures to introduce Septage Treatment Plant (STP) for treatment and reuse of faecal waste. This faecal management comes under the AMRUT scheme. The treatment plant is designed in a manner to sustain for 7 years at a go.

While the whole world is endeavoring towards sanitisation, Bhubaneswar, now can hold its head high as it has been recognised for unparalleled FSSM services.

The cesspool vehicles which were earlier dumping the sludge on open fields, road side drains and water bodies are now disposing the waste at the STP. The City has an efficient 75 KLD Septage Treatment Plant for a safe disposal and treatment of sludge. The STP has show an efficiency level of 100% over the last one year.