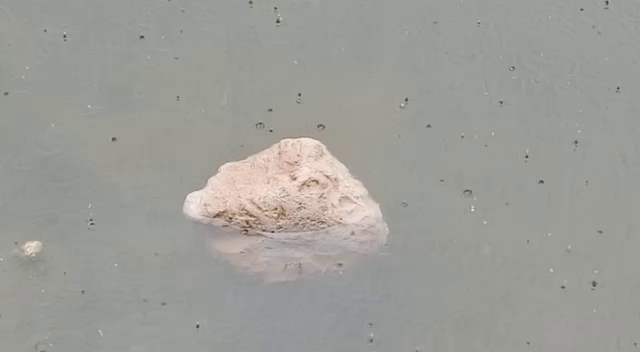 SunstarTV Bureau: A stone was found floating in the sea off Puri coast in Odisha, even as mystery behind Ram Setu continues to unfold. Jagan, an auto-rickshaw driver and resident of Mati Tota, Lane No. 5 in Puri town, found the rare stone floating in the sea.

Reportedly, the youth found the floating stone during an emersion ceremony on the sea beach in Puri yesterday. Out of curiosity, he collected the stone from the seawater and showed it to a servitor of Lord Jagannath to know about it.

“I was surprised to see a stone floating in the sea. I showed the stone to Sambhunath Khuntia, a servitor of the Jagannath Temple, to know the truth behind the floating stone,” said Jagan.

To examine its distinctiveness, when the stone was thrown into the holy Markandeya pond, it also floated in the water.

Soon after the news spread in the pilgrim town, the denizens claimed it as the fraction of ‘Ram Setu’ – described in ‘Ramayana’.

The science behind floating of stone could come to light if it would examine at a laboratory by researchers, the servitor said.

The 50-km stretch Adam’s Bridge or Ram Setu is the only archaeological and historical evidence of Ramayana. While scientists believe that Ram Setu is made of chain of limestone shoals, the myth says that the bridge connecting Rameswaram and Sri Lanka was built by Vanaras (monkeys) by the command of Lord Ram in Treteya Yug. The stones were floating on the sea by touch of Nala and Neel.

NASA says that the structure captured by satellite is naturally occurring chain of sandbanks.